The Bush Hotel… a House of Hospitality 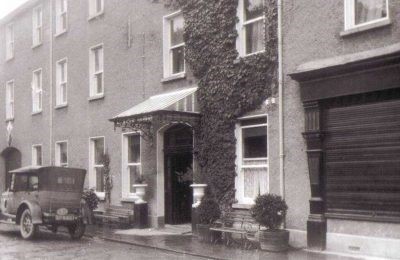 Since the late Eighteenth Century the simple bush that grew outside the local inn has been the symbol of a unique and historic establishment. Now in its fourth century, the Bush Hotel has maintained the Irish tradition of the Teach Aiochta, the ‘house of hospitality’ in all the changing circumstances of the passing years.
The early Eighteenth Century was a totally different world to present-day Ireland. An increasingly large rural population in Counties Leitrim and Roscommon lived in great poverty and dreadful housing.  They were mostly Irish speaking, illiterate and dependant on the potato as their main source of food.  There was a small middle class of larger farmers, merchants and lower clergy.  A tiny but powerful upper class was made up of landlords, their agents, government officials and Established Church Clergy.
Early in the life-time of the Bush Hotel, in 1798, in a bloody aftermath of that year’s Rebellion, 200 captured rebels were brought to Carrick on Shannon, and following a ‘lottery of death’ 17 were hanged in the town centre.  The following years were marked by periodic famine, outbreaks of cholera and typhus, and rural unrest in reaction to land scarcity and rack-renting.  The grievances of the rural poor found expression in secret agrarian societies like The Ribbonmen, who used terror and even death to achieve their ends.  These subversives feature in Anthony Trollop’s first novel, The McDermotts of Ballycloran, set in Leitrim in that era.
The Bush Hotel, complete with rush-covered floors, is the scene of some of the action in the book.The greatest National leader of this era was Daniel O’Connell, who visited Carrick on Shannon in 1828.  He led the successful campaign for Catholic Emancipation and the unsuccessful one for Repeal of the Act of Union. 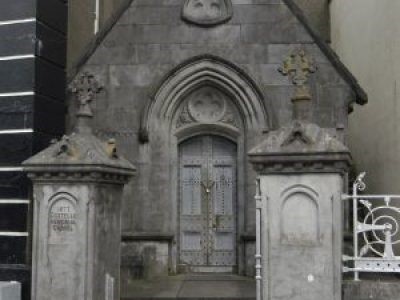 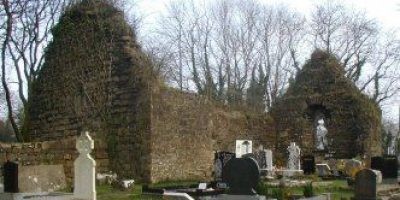 The greatest tragedy in Irish history was the Great Famine 1845- 1850. Caused by the failure of the potato crop and the inadequate steps taken by the British government to deal with the resulting starvation, it marked a turning point in Ireland.  One million died: another million left the country, starting a stream of emigration that lasted till recent decades.
The Famine Memorial Graveyard at St Patrick’s Hospital is a permanent local reminder of that terrible time and is within 10 minutes walk of the Bush Hotel.
As the country slowly recovered in the wake of the Famine, an increasing middle class emerged.  Towns like Carrick on Shannon took on a new more prosperous appearance as the second half of the Century moved on.  The humble way-side inn became a fine hotel, one of the larger buildings in the town centre, along with the banks, the larger shops and new Catholic Church, across from the Bush Hotel.  The extension of the railway from Longford to Sligo in 1862 provided Carrick on Shannon with its own railway station, a major economic boost.
During this tour of Roscommon, Leitrim and Cavan in the early 1860’s the Fenian leader, Jeremiah O’Donovan Rossa, stayed in the Bush Hotel.  His mission was to convert the agrarian Ribbonmen to the more nationalist and republican Fenianism.
An important Irish leader who stated in the Bush Hotel in the 1880’s was Charles Steward Parnell, the ‘Uncrowned King of Ireland’. Along with Michael Davitt he addressed a huge Land League meeting in Carrick on Shannon.  At this time the Catholic Parish Priests of County Leitrim, wishing to assert the political influence they held since the time of Daniel O’Connell, met in the Bush to nominate their own candidate during a general election.
At the end of Parnell’s career, the Irish Home Rule Party Split into two factions over his leadership.  A public meeting of the Anti-Parnellites, outside the Bush Hotel was attacked and disrupted by Parnellites from Drumshanbo, and had to withdraw behind the railings and gates of St Mary’s Church.
The arrival of the Marist Sisters in 1873 and the Presentation Brothers in 1894 enhanced Carrick on Shannon as a centre of education for over a century.
Two matters of interest in the story of the Bush Hotel are remembered from the Nineteenth century.  The first was a tragic accident, when a male guest, who had a wooden leg, over-balanced and fell down the stairs, sustaining fatal injuries.  The other was a ghostly presence in the attic, which may have been fact or phantom!In 1898, The Local Government Act replaced the old Grand Jury with the more Democratic Leitrim County Council.
The meetings of the Council, the sessions of the Courts, and the business of commercial travellers all brought additional trade to the Hotel.  Despite emigration the town still catered for a large rural population.  Agriculture was modernising, the setting up of the local Kiltoghert Co-operative Creamery being a good example.  Emigrants’ remittances from America helped the local economy.
The coming of the Twentieth century was a time of great hope and expectation.  It was marked for the Bush Hotel by the building in 1902 of the present three-story structure facing on to Main St., as the business continued to expand.
The coming of the motor car brought a new dimension to travel and the Bush Hotel was a popular stop on the Dublin-Sligo Road.
Early events in the new century were the expectation of Home Rule, the setting up of the Ulster and National Volunteers, the First World War, the 1916 Rising, all with local repercussions.
In August 1917 a then little known visitor arrived at the Bush Hotel.  He had come to organise the Sinn Fein Party in Carrick on Shannon, Drumlion and Gowel.  His name was Michael Collins, who soon became the heroic leader in the War of Independence (1919-21) and a victim of the Civil War (1922-23).
Other events were the setting up of the Irish Free State 1922, the replacement of the Royal Irish Constabulary by An Garda Siochana, and important bye-election in 1925 when Sam Holt, Carrick on Shannon’s only T.D. was elected.
The period 1939-45 was a difficult time for business because of war-time scarcity, but the country maintained its neutrality and was spared the horrors of the Second World War.  In the 1950’s Carrick on Shannon developed as a centre for angling tourism.  Later the establishment of the Local Marina made Carrick on Shannon a leading centre for river cruising.  These developments helped to make tourism a major part of the local economy.
The building of the riverside service road gave a new access to the Bush Hotel property and enabled major expansion, which includes the Orchard Conference Centre and spacious car parks.
In 1997, because of her family ties with the Carrick on Shannon area Mary McAleese chose the Bush Hotel to Launch her successful campaign for President of Ireland – Uachtaran na hEireann.
The Hotel was demolished and rebuilt in 1920. Throughout the Twentieth Century the Bush Hotel, County Leitrim has continued to be a major centre of social and commercial life in Carrick on Shannon.
Hotel was acquired by the Dolan Family in 1992 after 3 years closure and following a complete refurbishment  opened in 1993 with 11 employees (8 of whom are still with us and two sadly are deceased).
Dolan Family decided to move on and since April of 2022 the Hotel is recently operated by an Irish Firm called Hotels Properties with great Portfolio of Hotels accross Ireland and the UK.
Since then it has been a flagship for the development tourist industry and has maintained its reputation for unrivalled service to its patrons and has undergone continuous expansion and redevelopment in the last decade. 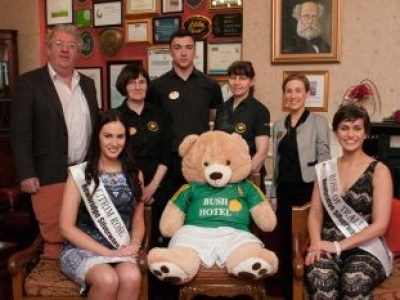 Over the years the Bush has greatly helped the local community by providing facilities for meetings of clubs and organisations and social functions. In 2010, when St Mary’s Church was undergoing renovations, over several months Sunday Mass was celebrated in the Orchard Room of the Hotel proving on that occasion that there was ‘room at the Inn’.
Gratefully compiled by local historian Farrell McElgunn

Preference cookies are used to keep track of your preferences, e.g. the language you have chosen for the website. Disabling these cookies means that your preferences won't be remembered on your next visit.

We use analytical cookies to help us understand the process that users go through from visiting our website to booking with us. This helps us make informed business decisions and offer the best possible prices.